The paper mill, situated by the River Whiteadder, (a tributary of the River Tweed) was first built between 1771 and 1797 and then in 1842 it was reconstructed by David Cousin for the Young Trotter Company. The railway line ran into the factory delivering esparto grass and china clay. It was owned by the Dexter Corporation until around 2000 and is currently owned by the AHLSTROM-MUNKSJÖ Paper Group. 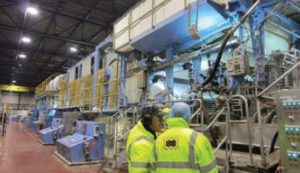 Drives and Automation Ltd were awarded the contract to upgrade the existing 24 axis paper machine drive system, which was based on a line shaft with cone pulleys and belts. The proposal was to convert the existing drive spindles into independent drives utilising AC geared motors and inverter control.

The existing line shaft system required high levels of maintenance due to the considerable number of pulleys, belts, bearings and the hot steamy environment. Speed control accuracy was also an issue with belt slip, temperature change and operator set up errors.

The new drive system comprised 24 No. ABB ACS M1 closed loop inverters with 24 No. ABB AC induction motors close coupled to Siemens Flender gear reducers, where necessary. The control panel was located in the existing substation but had to be purpose built, with a back-to-back configuration, to fit within the available space.

The drive control system, based on Codesys, required no additional PLC control. HMI panels provided the operator interface at strategic locations on the plant with smaller HMI panels providing local sectional speed and draw displays. Due to the comms overhead a ‘Red Lion’ Datastation Plus protocol converter was utilised to manage the Ethernet communications between the various
HMI’s and the 24 No. drive controllers. Operator errors were reduced by storing machine setup data in recipes files within the main HMI panel, which can then be downloaded to the 24 drive modules between product changes.

The commissioning timescales were very tight to reduce the impact on production; an initial 72 hour period was the target and much of the cable installation was pre-installed prior to the outage.
It was literally ‘all hands to the pumps’ connecting the 24 No motors, encoders, fans and commissioning the machine within such a short period of time.

The machine went into production soon afterwards, the drive system has been performing well and production has increased and maintenance has been significantly reduced since the installation.

The new drive system was designed to operate at a line speed of 350 m/min. Drive sizes were generated using Tapi tables following a previous survey.

The contract was to replace the existing control system with modern drive control equipment giving improved speed regulation and diagnostics.  Most of the existing motors were replaced and new gearboxes and operator controls supplied. 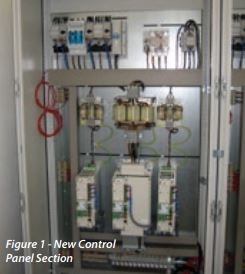 The drives were configured into the following groups for starting and stopping purposes:

Each drive was provided with an individually adjustable ‘electronic’ gear ratio to set the required ‘draw’ between rollers, via the HMI. The facility for individual draw control from machine mounted push buttons was provided as required. 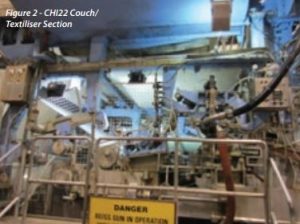 A high speed proprietary ABB Drive Link network allowed peer to peer drive communications and referencing to be passed between sectional drives at high speed. An Ethernet Network with data collated via a Red Lion Datastation provided the information to the remote HMI’s to display speeds, section loads and draw.

The Pilz Multi based safety system has emergency stop and guard diagnostics information displayed on one of the HMI pages.